In October 2008 we bought a degraded block of land 16 kms north of Wickepin in the West Australian Wheat Belt approx 200 km east south east of Perth. For the past one hundred years the land had mainly been used for running sheep with a small section used for cropping. 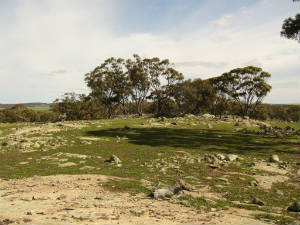 At 440 metres, Sacha Boodja sits on top of one of the highest hills in the district and affords magnificent views of the surrounding countryside. Approximately half the land is Granite outcrop studded with old trees, mainly York Gum, with              some old Jam Wattle and She-oaks.

When we arrived there where no young trees, no undergrowth, no top soil and the hillsides where heavily eroded, with a large erosion gully running through the block. Many of the remaining older trees where stressed or dying. Even in the middle of winter (the main growing season here) the land was bare, just rocks, and fallen timber with only the merest of green tinges to the soil.

There was no house, no infrastructure, no water, no power and no road in. We were both in our early fifties and we had only enough money to buy the land. But we had fallen in Love. We could feel the land calling us, see its potential and had a vision of what could be. That Love and vision has given us the strength and tenacity to continue in spite of the challenges that such a crazy undertaking brings.

Now some seven years later, the land is healing, top soil is rebuilding, earth worms are reappearing, erosion has stopped, rain water runoff is now only from areas of bare rock and roadways, thousands of tree seedlings are emerging, the understory is re-establishing and many native birds, grasses and flowers are reappearing.

All of this is happening in areas where the only human intervention was to remove the sheep.

We have also planted thousands of trees as wind breaks using a diverse range of native species and these are now beginning to establish. Soon much of Sacha Boodja will be forest. 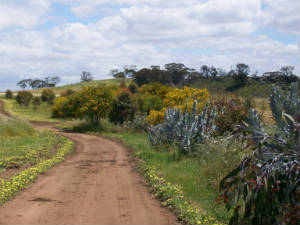 We live in an area of minimal (and increasingly unreliable) rainfall with an average of 350mm p.a, most of the rainfall occurring during the winter months. With no access to scheme water, the collection and storage of water is our most precious resource.

We have planted an organic vegetable garden and an orchard that is now beginning to bare fruit.

Many ceremonies and intentional prayers are flowing in all projects, into the tree plantings, the garden and every inch of the land.

We live simply here. The facilities are basic, it is not the modern electrically equipped life. We don’t have TV or lots of other gadgets, which is a great blessing. Having said this, we are not against technology we just find a lot of things unnecessary and undesirable. 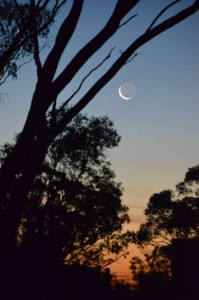 It is not always easy or comfortable, but a great teaching in acceptance.